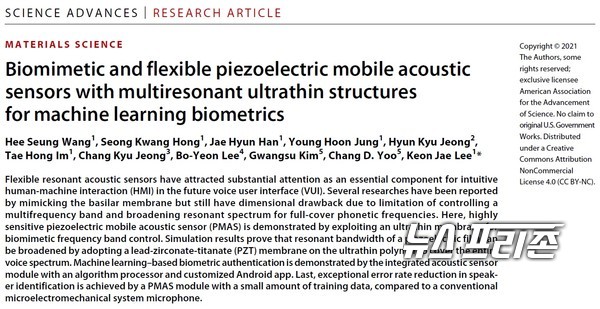 The Korea Advanced Institute of Science and Technology (KAIST) announced on February 15th that a team led by Professor Keon Jae Lee and Hee Seung Wang, Ph.D. of the Department of Materials Science and Engineering, developed the resonant flexible piezoelectric acoustic sensor (f-PAS) and subsequently successfully used the sensor in smartphones and AI speakers.

The technology that enables interactive communication with smart devices through voice is the most intuitive technology for human users, and the importance of sensors continues to grow due to the recent expansion in the AI speakers and IoT-powered electronics market.

The research team revealed the theory behind resonance, frequency, and the role of the piezoelectric film in the sensor structure. The team has also reduced the sensor’s size smaller and improved its performance.

The first-ever flexible piezoelectric-based resonant voice sensor (f-PAS) developed by Professor Keon Jae Lee’s team in 2019 was too large. The large size of the f-PAS prevented it from being systematically integrated with commercial electronic circuits or applied to mobile devices.

The membrane of the f-PAS vibrates when recognizing speech, creating a resonance phenomenon which allows the sensor to pick up high-sensitivity voltage signals.

The trapezoid-shaped base membrane in the human cochlea generates numerous resonances in the audible frequency range, amplifying sounds and allowing humans to hear distant sounds.

In order to mimic and maximize this effect in applying it to the voice sensor, the research team used an extremely thin and flexible piezoelectric film to imitate the human ear and produced a resonance-type voice sensor that is ultrasensitive in identifying sounds through the multiple resonance channels that the team developed.

According to the results of this research, when this voice sensor and a commercial capacitive microphone were tested under the same conditions, the recognition rate in voice analysis and speaker identification was significantly higher with the f-PAS, and the error rate was reduced by 60-95% depending on the conditions.

FRONICS, the company founded by Professor Lee, unveiled the prototype at CES 2020 and is currently looking to collaborate with leading IT companies in Silicon Valley through their US branch.

Professor Lee said, “This mobile voice sensor that we have successfully applied to devices has high sensitivity, and its size has also been dramatically reduced, so it can be applied as a key sensor to drive the future of artificial intelligence. It will soon be applied in our daily lives as the mass production and commercialization process is nearing completion as well.”

This research was sponsored by the Human+ AI Sensor Center of the National Research Foundation of Korea, and the results were published in the international scientific journal “Science Advances” on February 12.